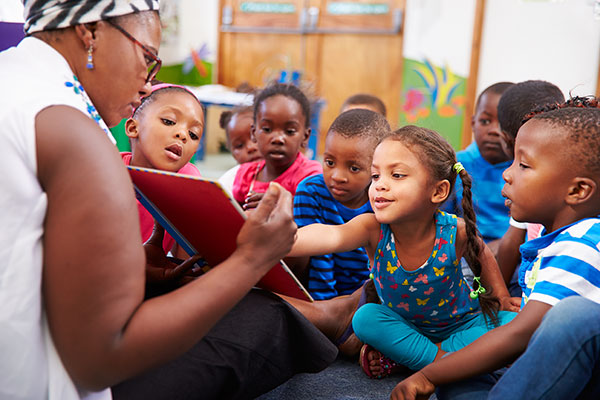 Conversations about the importance of Early Childhood Education (ECE) have been circulating for quite some time. But with more and more studies now revealing the potential learning disparities between students who reaped the benefits of early childhood education and those who did not, the topic has become more prevalent than ever. Contemporary research now overwhelmingly shows that the investment in early education—particularly among disadvantaged children—improves not only cognitive abilities, but also critical behavioral traits like sociability, motivation and self-esteem. 1

For those who might still be undecided on the issue, here are five compelling reasons why early childhood education definitely matters.

The economic implications of these statistics impact many more than just those who are imprisoned. On average, each individual federal prisoner incarcerated in 2017 cost taxpayers $34,704 per year—and with a large prison population, that total figure adds up quickly. 4 So what does this have to do with ECE? Studies suggest that putting more children in pre-K now will result in fewer adults in prison later in life. 5  The long-term impact that Early Childhood Education can have on a child is astounding: the benefits can better entire communities, not only the child or their families.

Formally referred to as “The Early Catastrophe: The 30 Million Word Gap by Age 3,” this 1995 research study confirmed what many ECE advocates have been preaching for decades: Much of the most critical brain development in children takes place before they even reach kindergarten. 6 The study itself revealed that children from the poorest families learned approximately 30 million fewer words than those from more affluent families by age three. These numbers are a reflection of how much the parents talk to their children, and are directly linked to children’s academic performance later in life. That language deficit could then cascade on to the next generation, creating a negative loop. Much of this cognitive development takes place before a child will enter kindergarten, and Early Childhood Education advocates cite this study when highlighting the value of early interventions that directly address the developmental needs of young minds. According to the National Association for the Education of Young Children (NAEYC), Early Childhood professionals have the opportunity to build on what children already know, introducing and reinforcing new words in addition to already existing interests and capabilities,

3. The U.S. trails other countries in ECE

Building upon the foundation and school readiness skills that Early Childhood Education provides is a critical element in preparing our children to be successful in an increasingly competitive global economy. It is therefore especially alarming to learn that the United States falls significantly behind other countries in enrollment, investment and quality of ECE resources. As of 2016, less than half of all 3-year olds in the United States were enrolled in any pre-primary programs, according to the National Center for Education Statistics. 7 Moreover, these numbers have not changed much in nearly two decades! Pre-primary or Early Childhood Education directly relates to development of a child’s pre-literacy, pre-writing and pre-math skills. It also affects school readiness and other skills that are essential to educating a competitive workforce in a global economy.Many of these disparities are due to a large preschool access gap, which is why some efforts are being made on a national scale to increase the U.S. investment in ECE.

4. Early education initiatives are in the political spotlight

Whether you care to follow the daily partisan back-and-forth between policymakers or not, it’s undeniable that early childhood education initiatives have become a focus area for elected officials in all levels of government. In fact, early childhood education policy is being robustly debated in the run-up to the 2020 residential election. Some candidates argue for universal preschool, while others believe that parents should receive tax credits to help make childcare more affordable. For example, California Senator Kamala Harris supports The Child Care for Working Families Act, introduced in 2019, that builds on the existing Child Care and Development Block Grant Program. Massachusetts Senator Elizabeth Warren’s plan is similar, but focuses more intently on childcare cost, quality and worker pay. The Warren plan seeks to boost the number of children in formal childcare from 6.8 million to 12 million. Other candidates, like Senator Kirsten Gillibrand and Mayor Pete Buttigieg, want to increase the number of tax credits families can earn based on their childcare expenses. No matter your political leanings, it’s safe to say that early childhood education policy will receive additional attention in the run-up to the national 2020 elections.

We’ve seen how Early Childhood Education can impact children in the long run, by helping them read earlier, stay in school longer and avoid trouble with the law. And it’s easy to see how quality and accessible childcare makes it easier for parents with young children to return to work. Even if the parent already works, high-quality childcare helps parents improve their productivity at work by missing fewer work hours and opening up options for further education.

And the children in ECE benefit economically as well: as adults, they’re more likely to be educated, employed and trained in a specific occupation. These individual factors can play a big role in your local economy—and by extension—the national economy. A 2018 study found that rising childcare costs resulted in a 13 percent decrease in employment of mothers of young children. 8   Another report shows that nationally, the economic cost of lost earnings and productivity due to low-quality or nonexistent childcare totals as much as $57 billion dollars each year. 9 That’s a substantial economic drag that can be mitigated with expanded universal Pre-K coverage. For example, in 2009, Washington, D.C. enacted a Universal Preschool program policy, which offered free or subsidized preschool to four-year-olds and some three-year-olds. A study of this program shows a substantial economic payoff, with an astounding 10 percent increase in workforce participation among mothers of young children after the program began in 2009. 10 More participation in the workplace means fewer dollars lost by American business and more diversity in the workplace. Not only is early childhood education important for families, it is key for our nation’s workplace and economic health.
Notes
1 National Bureau of Economic Research, Schools, Skills and Synapses [accessed June
2019] https://www.nber.org/papers/w14064
2 U.S. Department of Justice, Bureau of Justice Studies, Education and Correctional Populations
[accessed June 2019] https://www.bjs.gov/content/pub/pdf/ecp.pdf
3 Public Policy Research Institute, The Council of State Governments Justice Center, Breaking
Schools’ Rules: A Statewide Study of How School Discipline Relates to Students’ Success and
Juvenile Justice Involvement [accessed June
2019] https://knowledgecenter.csg.org/kc/system/files/Breaking_School_Rules.pdf
4 Federal Bureau of Prisons, Annual Determination of Average Cost of Incarceration, [accessed
June 2019] https://www.federalregister.gov/documents/2018/04/30/2018-09062/annual-
determination-of-average-cost-of-incarceration
5 High Scope, The Perry Preschool Project, [accessed June 2019] https://highscope.org/perry-
preschool-project/
6 American Federation of Teachers, American Educator, The Early Catastrophe: The 30 Million
Word Gap by Age 3 [accessed June
2019] https://www.aft.org/sites/default/files/periodicals/TheEarlyCatastrophe.pdf
7 National Center for Education Statistics, Fast Facts: What percentage of children are enrolled
in preprimary education? [Accessed June
2019] https://nces.ed.gov/fastfacts/display.asp?id=516
8 American Economic Association, American Economic Review: Papers &amp; Proceedings 2013,
Female Labor Supply: Why Is the United States Falling Behind? [accessed June
2019] https://www.aeaweb.org/articles?id=10.1257/aer.103.3.251
9 Ready Nation, Council For a Strong America, Want to Grow the Economy? Fix the Child Care

Crisis [accessed June 2019] https://www.strongnation.org/articles/780-want-to-grow-the-
economy-fix-the-child-care-crisis
10 Center for American Progress, The Effects of Universal Preschool in Washington, D.C.:
Children’s Learning and Mother’s Earnings, [accessed June
2019] https://cdn.americanprogress.org/content/uploads/2018/09/14125635/Children-
Learning-Mothers-Earning-report.pdf
EDITOR’S NOTE: This article was originally published in 2016. It has since been updated to
include information relevant to 2019.
Source: Rasmussen College – August 2019