Investments in Education May Be Misdirected 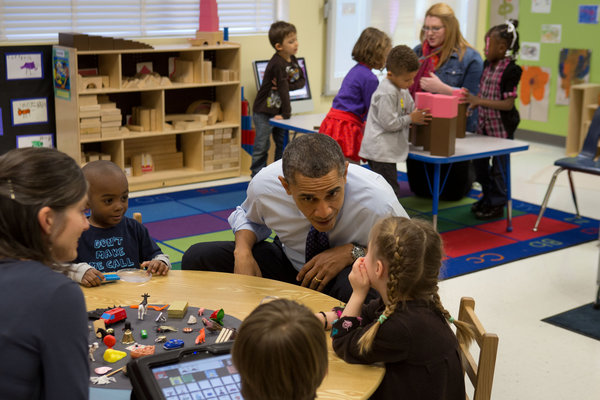 Stephen Crowley/The New York Times
President Obama at a school in Georgia. He has called for universal preschool education.

James Heckman is one of the nation’s top economists studying human development. Thirteen years ago, he shared the Nobel for economics. In February, he stood before the annual meeting of the Nebraska Chamber of Commerce and Industry, showed the assembled business executives a chart, and demolished the United States’ entire approach to education.

The chart showed the results of cognitive tests that were first performed in the 1980s on several hundred low-birthweight 3-year-olds, who were then retested at ages 5, 8 and 18.

Children of mothers who had graduated from college scored much higher at age 3 than those whose mothers had dropped out of high school, proof of the advantage for young children of living in rich, stimulating environments.

More surprising is that the difference in cognitive performance was just as big at age 18 as it had been at age 3.

“The gap is there before kids walk into kindergarten,” Mr. Heckman told me. “School neither increases nor reduces it.”

If education is supposed to help redress inequities at birth and improve the lot of disadvantaged children as they grow up, it is not doing its job.

It is not an isolated finding. Another study by Mr. Heckman and Flavio Cunha of the University of Pennsylvania found that the gap in math abilities between rich and poor children was not much different at age 12 than it was at age 6.

The gap is enormous, one of the widest among the 65 countries taking part in the Program for International Student Achievement run by the Organization for Economic Cooperation and Development.

American students from prosperous backgrounds scored on average 110 points higher on reading tests than disadvantaged students, about the same disparity that exists between the average scores in the United States and Tunisia. It is perhaps the main reason income inequality in the United States is passed down the generations at a much higher rate than in most advanced nations.

That’s a scandal, considering how much the government spends on education: about 5.5 percent of the nation’s economic output in total, from preschool through college.

And it suggests that the angry, worried debate over how to improve the nation’s mediocre education — pitting the teachers’ unions and the advocates of more money for public schools against the champions of school vouchers and standardized tests — is missing the most important part: infants and toddlers.

Research by Mr. Heckman and others confirms that investment in the early education of disadvantaged children pays extremely high returns down the road. It improves not only their cognitive abilities but also crucial behavioral traits like sociability, motivation and self-esteem.

Studies that have followed children through their adult lives confirm enormous payoffs for these investments, whether measured in improved success in college, higher income or even lower incarceration rates.

The costs of not making these investments are also clear. Julia Isaacs, an expert in child policy at the Urban Institute in Washington, finds that more than half of poor 5-year-olds don’t have the math, reading or behavioral skills needed to profitably start kindergarten. If children keep arriving in school with these deficits, no amount of money or teacher evaluations may be enough to improve their lot later in life.

Much attention has focused lately on access to higher education.

A typical worker with a bachelor’s degree earns 80 percent more than a high school graduate. That’s a premium of more than $500 a week, a not insubstantial incentive to stay in school. It is bigger than ever before. Yet the growth of college graduation rates has slowed for women and completely stalled for men.

The Economic Report of the President released last month bemoaned how the nation’s college completion rate had tumbled down the international rankings, where it now sits in 14th place among O.E.C.D. countries.

The report restated the president’s vow to increase the number of college graduates by 50 percent by 2020, and laid out how the federal government has spent billions in grants and tax breaks to help ease the effects of rising tuition and fees. Last year the government spent almost $40 billion on Pell grants, more than twice as much as when President Obama came to office.

Mr. Heckman’s chart suggests that by the time most 5-year-olds from disadvantaged backgrounds reach college age, Pell grants are going to do them little good.

“Augmenting family income or reducing college tuition at the stage of the life cycle when a child goes to college does not go far in compensating for low levels of previous investment,”

Erick Hanushek, an expert on the economics of education at Stanford, put it more directly: “We are subsidizing the wrong people and the wrong way.”

To its credit, the Obama administration understands the importance of early investments in children. The president has glowingly cited Mr. Heckman’s research. In his State of the Union address, the president called for universal preschool education.

“Study after study shows that the earlier a child begins learning, the better he or she does down the road,” Mr. Obama said at a speech in Decatur, Ga., in February.

But the fresh attention has not translated into money or a shift in priorities. Public spending on higher education is more than three times as large as spending on preschool, according to O.E.C.D. data from 2009. A study by Ms. Isaacs found that in 2008 federal and state governments spent somewhat more than $10,000 per child in kindergarten through 12th grade. By contrast, 3- to 5-year-olds got less than $5,000 for their education and care. Children under 3 got $300.

Mr. Heckman’s proposals are not without critics. They argue that his conclusions about the stupendous returns to early education are mostly based on a limited number of expensive experiments in the 1960s and 1970s that provided rich early education and care to limited numbers of disadvantaged children. They were much more intensive endeavors than universal preschool. It may be overoptimistic to assume these programs could be ratcheted up effectively to a national scale at a reasonable cost.

Yet the critique appears overly harsh in light of the meager improvements bought by the nation’s investments in education today. A study by Mr. Hanushek found that scores in math tests improved only marginally from 1970 to 2000, even after spending per pupil doubled. Scores in reading and science declined.

“Early education is an essential piece if we are going to have a better education system,” Barbara Bowman, an expert on early childhood education in Chicago who has advised the Education Department. “We’re inching in that direction.”

Education is always portrayed in the American narrative as the great leveler. But it can’t do its job if it leaves so many behind so early.