Sophie and the Great Expulsion

This is Sophie’s nightmare: One day, immigration agents will show up at her home in Los Angeles to deport her mother and father.

Sophie Cruz, 6, was born in California to undocumented parents originally from Oaxaca, Mexico. Despite her tender age, she clearly understands the difference between her U.S. citizenship and her parents’ immigration status. 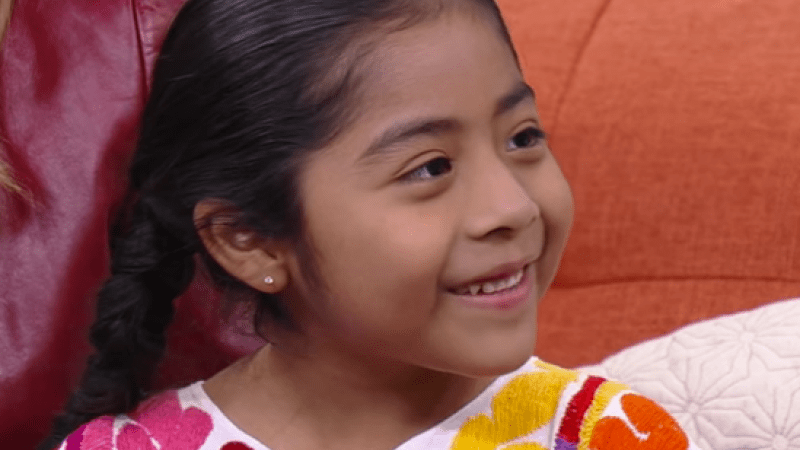 That’s why Sophie dared to speak to Pope Francis when he visited Washington last September. As the popemobile moved slowly down the avenue, Sophie tried to break through tight security. Francis saw her and gestured that she be brought to him. He kissed her on the cheek, and Sophie handed him a letter in which she asked him to protect her parents from deportation. That’s how Sophie became famous.

Her smile disarms you. She wears pigtails and colorful dresses with folk motifs. She also has an extraordinary memory. A few days ago, when I met her, Sophie recited a long poem —“No Te Rindas” (“Never Give Up”), by the Uruguayan poet Mario Benedetti—and then she presented me with a drawing featuring that phrase. That was my birthday gift: A 6-year-old gave me a lesson on leadership and courage. At 58, I still have a lot to learn.

The Republican presidential candidate Donald Trump has said that he would like to deport 11 million undocumented residents within two years. If he were to win the presidency and put his massive deportation plan into motion, it’s fair to assume that Sophie and her little sister would have to leave with their parents and go to Mexico, even though they are American citizens. After all, they can’t stay here with nobody to care for them. And Sophie and her sister are not the only children in this situation—about 4.5 million U.S.-born children have at least one undocumented parent.

A deportation effort of that scale, with all its hateful echoes of other such expulsions throughout history, would lead to countless human rights violations and radically change the image of the U.S. around the world. The plan would also cost taxpayers some $300 billion, according to research from the American Action Forum. The same organization also estimates that the number of agents needed to arrest undocumented individuals would rise from the current 4,884 to 90,582. The number of immigration detention center beds would have to go from 34,000 to 348,831. Additionally, 32,445 lawyers would be needed to process immigration paperwork.

In brief, mass deportation would be an economic disaster. The American Action Forum contends that the plan would destroy 10.3 million jobs and shrink gross domestic product in the U.S. by about $1 trillion a year.

Meanwhile, the country would need to deport about 15,000 people every day for 24 months straight. This is the human horror that Trump is proposing. The numbers themselves are stunning, but they cry out all the more when you put faces to them. I know many people who could be deported, including Sophie’s parents.

Sadly, Trump’s expulsion plan is predicated on two enduring lies: One, that the U.S. is being invaded along its southern border; and two, that immigrants are to blame for the country’s economic and security problems.

Of course, the invasion of the U.S. is a myth. The number of undocumented immigrants living here has held steady for the last seven years. And the border is more secure than ever.

It’s also a lie that undocumented immigrants are affecting Americans’ security and prosperity. These immigrants pay taxes, create jobs and take on the work that other Americans don’t want to do. They contribute more to the economy than they take from it.

And no connection exists between undocumented immigrants and terror groups. None of the 19 terrorists involved in the Sept. 11, 2001, attacks entered illegally from Mexico. Besides, contrary to what many in the English-language media say, immigrants are less likely to commit crimes than U.S.-born residents, according to data from the American Immigration Council.

So it seems that we are faced with two visions for America’s future these days. Trump promotes hate, division and deportation. Sophie wants to keep her family together and protect other immigrants like her parents.

I believe in Sophie’s vision much more.

Jorge Ramos, an Emmy Award-winning journalist, is the host of Fusion’s new television news show, “America With Jorge Ramos,” and is a news anchor on the Univision Network. Originally from Mexico and now based in Florida, Ramos is the author of nine best-selling books, most recently, “A Country for All: An Immigrant Manifesto.”