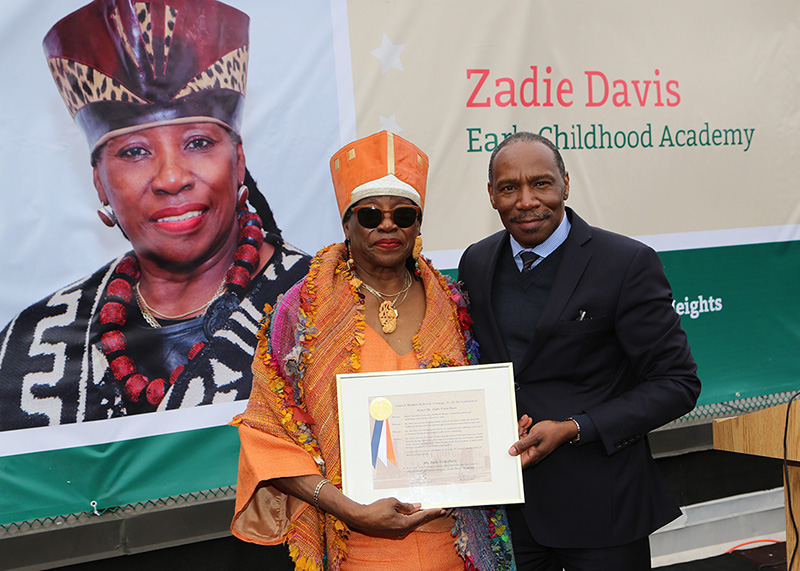 “In a career spanning some four-and-a-half decades of public service, Zadie Davis has set the standard by which others in the field of early childhood education are measured,” said Friends of Crown Heights CEO Vaughan Toney. “It is a fitting tribute to Ms. Davis that we are able this Women’s History Month to salute her outstanding record of professional accomplishment and public service by naming in her honor this educational center to which she has devoted the better part of her life thus far. As a consummate educator and activist, mentor, matriarch and source of continuing inspiration across multiple generations in our community, Zadie Davis is a model of living history.”

Born the 9th of 12 children in South Carolina, Zadie Viola Davis migrated to New York City shortly after obtaining the Bachelor of Science degree from Claflin University in 1970. She subsequently pursued additional studies in Early Childhood Education at Medgar Evers College of the City University of New York and at Long Island University; she later graduated with the Master’s degree in Education from New York University and holds multiple New York State professional certifications as a Teacher, School Supervisor and District Administrator. In addition to her outstanding career and accomplishments as an educator, Zadie Davis is also an ardent advocate for community empowerment. She is a former member of Brooklyn Community Planning Board #3, representing the historic communities of Bedford-Stuyvesant, Stuyvesant Heights and Ocean Hill, and remains an active member of various neighborhood committees, block associations and civic improvement initiatives.