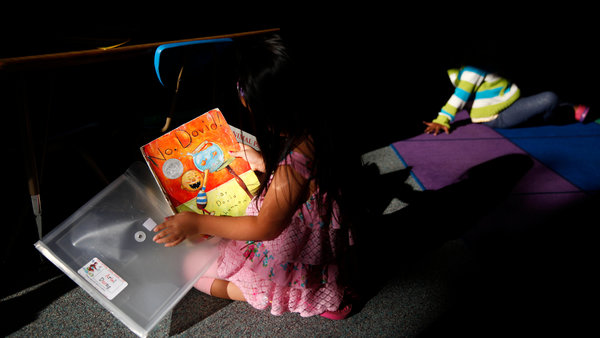 Ramin Rahimian for The New York Times
BY: MOTOKO RICH

Nearly two decades ago, a landmark study found that by age 3, the children of wealthier professionals have heard words millions more times than those of less educated parents, giving them a distinct advantage in school and suggesting the need for increased investment in prekindergarten programs.

Now a follow-up study has found a language gap as early as 18 months, heightening the policy debate.

The new research by Anne Fernald, a psychologist at Stanford University, which was published in Developmental Science this year, showed that at 18 months children from wealthier homes could identify pictures of simple words they knew — “dog” or “ball” — much faster than children from low-income families. By age 2, the study found, affluent children had learned 30 percent more words in the intervening months than the children from low-income homes.

The new findings, although based on a small sample, reinforced the earlier research showing that because professional parents speak so much more to their children, the children hear 30 million more words by age 3 than children from low-income households, early literacy experts, preschool directors and pediatricians said. In the new study, the children of affluent households came from communities where the median income was $69,000; the low-income children came from communities with a median income of $23,900.

Since oral language and vocabulary are so connected to reading comprehension, the most disadvantaged children face increased challenges once they enter school and start learning to read.

“That gap just gets bigger and bigger,” said Kris Perry, executive director of the First Five Years Fund, an advocate of early education for low-income children. “That gap is very real and very hard to undo.”

President Obama has called for the federal government to match state money to provide preschool for all 4-year-olds from low- and moderate-income families, a proposal in the budget that Congress voted to postpone negotiating until later this year. The administration is also offering state grants through its Race to the Top Program to support early childhood education. Critics argue, however, that with so few programs offering high-quality instruction, expanding the system will prove a waste of money and that the limited funds should be reserved for elementary and secondary education.

But at a time when a majority of public schoolchildren in about a third of the states come from low-income families, according to the Southern Education Foundation, those who are pushing for higher preschool enrollment say that investing in the youngest children could save public spending later on.

In the latest data available from the National Institute for Early Education Research at Rutgers University, 28 percent of all 4-year-olds in the United States were enrolled in state-financed preschool in the 2010-11 school year, and just 4 percent of 3-year-olds.

The National Governors Association, in a report this month calling on states to ensure that all children can read proficiently by third grade, urges lawmakers to increase access to high-quality child care and prekindergarten classes and to invest in programs for children from birth through age 5. In New York, the Democratic mayoral candidate Bill de Blasio has said he would tax high-income earners to pay for universal prekindergarten in the city.

“A lot of states are saying, ‘Let’s get to the early care providers and get more of them having kids come into kindergarten ready,’ ” said Richard Laine, director of education for the National Governors Association. That way, he said, “we’re not waiting until third grade and saying, ‘Oh my gosh, we have so many kids overwhelming our remediation system.’ ”

Currently, 17 states and the District of Columbia have policies requiring that third graders be held back if they do not meet state reading proficiency standards, according to the Education Commission of the States.

Now, with the advent of the Common Core, a set of rigorous reading and math standards for students in kindergarten through 12th grade that has been adopted by 45 states and the District of Columbia, educators say the pressure to prepare young children is growing more intense.

Literacy experts have previously documented a connection between a child’s early vocabulary and later success in reading comprehension. In a study tracking children from age 3 through middle school, David Dickinson, now a professor of education at Vanderbilt University, and Catherine Snow, an education professor at Harvard University, found that a child’s score on a vocabulary test in kindergarten could predict reading comprehension scores in later grades.

Mr. Dickinson said he feared that some preschool teachers or parents might extract the message about the importance of vocabulary and pervert it. “The worst thing that could come out of all this interest in vocabulary,” he said, “is flash cards with pictures making kids memorize a thousand words.”

Instead, literacy experts emphasize the importance of natural conversations with children, asking questions while reading books, and helping children identify words during playtime.

Even these simple principles may be hard to implement, some educators say, because preschool instructors are often paid far less than public schoolteachers and receive scant training. In one study, Robert Pianta, dean of the Curry School of Education at the University of Virginia, found that in observations of 700 preschool classrooms across 11 states, teachers in less than 15 percent of the classes demonstrated “effective teacher-student interactions.”

“There is a lot of wishful thinking about how easy it is, that if you just put kids in any kind of program that this will just happen,” said W. Steven Barnett, director of the National Institute for Early Education Research, referring to the development of strong vocabularies and other preliteracy skills.

Literacy experts and publishing companies are rushing to develop materials for teachers. Scholastic Inc., the children’s book publisher, for example, began selling the Big Day for Pre-K program to preschools three years ago. Collections of books come with specific question prompts like “I see a yellow taxi. What do you see?”

Educators and policy makers say they also must focus increasingly on parents.

In Vallejo, Calif., where about 400 children up to age 5 attend publicly funded prekindergarten programs, the district invited Anne E. Cunningham, a psychologist and literacy specialist from the University of California, Berkeley, to conduct a training program for preschool teachers that included the development of parent education workshops. And in Kentucky, the governor’s Office of Early Childhood started a social media campaign last year that offers simple tips for parents like “Talk about the weather with your child. Is it sunny or cloudy? Hot or cold?”

Middle class and more-affluent parents have long known that describing fruit at the supermarket or pointing out the shape of a stop sign are all part of a young child’s literacy education.

But even in low-income families, parents who speak to their children more frequently can enhance vocabulary. In separate research, Ms. Fernald, working with Adriana Weisleder, a graduate student in psychology, recorded all the words that 29 children from low-income households heard over a day.

The researchers differentiated between words overheard from television and adult conversations and those directed at the children. They found that some of the children, who were 19 months at the time, heard as few as 670 “child-directed” words in one day, compared with others in the group who heard as many as 12,000.

Those who had heard more words were able to understand words more quickly and had larger vocabularies by age 2.

“Even in families that are low income and perhaps don’t have a lot of education, there are some parents that are very engaged verbally with their kids,” said Ms. Weisleder. “And those kids are doing better in language development.”