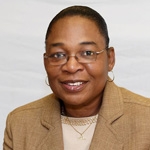 Hestelle I. Nichols is the Educational Director at our Friends of Crown Heights Center #1, located at 36 Ford Street in the Crown Heights section of Brooklyn. She has been an invaluable educational leader, mentor and guide to our instructional and administrative staff and to the children and families we serve ever since becoming a member of the FOCH family in 2008.

Ms. Nichols is a devoted educator whose career spans more than 30 years in the Anglophone Caribbean and North America. She has educated and nurtured children at all levels in Elementary schools both in St. Vincent and the Grenadines and in the British Virgin Island of Tortola. In 1996, she migrated to the United States and two years later -- in the summer of 1998 -- she joined the Friends of Crown Heights family as a Group teacher’s aide in our 671 Prospect Place facility. In October of that year, she was promoted to the position of Assistant Teacher at our former Rogers Avenue facility.  And it was there, she says, “while working alongside the talented and knowledgeable Group Teacher Ms. Virginia Somera, and under the caring and professional leadership of the then-director Mr. Daryl Davis,” that she developed her insatiable passion for Early Childhood Education.

Buoyed by the collegial support and encouragement of her peers, Ms. Nichols set off for Brooklyn College in the fall of the year 2000, graduating three years later with the Bachelor of Arts Degree in Early Childhood Education with an additional concentration in Political Science. She also obtained the New York State Department of Education Provisional Certificate for Pre-Kindergarten, Kindergarten and Grades 1 through 6. These accomplishments earned her a promotion to the position of Group Teacher in a Pre-Kindergarten Classroom.

Ms. Nichols continued her educational quest by enrolling in the graduate program at Brooklyn College, from which she later graduated with the Master of Science degree in Education. She now holds the New York State Department of Education Permanent Certificate for Pre-Kindergarten, Kindergarten, and Grades 1 through 6, as well as an Initial Certificate and a Professional Certificate for Birth to Grade 2. Further, Ms. Nichols has been initiated as a member of the Eta Theta Chapter of Kappa Delta Pi, the International Honor Society in Education which encourages the highest professional, intellectual and personal standards of its members and recognizes outstanding contributions in the field of education.

Ms. Nichols shares the view famously articulated by the noted developmental psychologist and educational philosopher Jean Piaget who said, “The primary goal of education is to create people who are capable of doing new things, not simply of repeating what other generations have done----- people who are creative, inventive, and discoverers.”

When not on the job constantly seeking new ways to improve her center, Ms. Nichols goes home to her husband, three sons, daughter-in-law and her granddaughter.

This week I visited one of Friends of Crown Heights Education Center's programs in Brooklyn! The incredible sense of a team spirit, centered on being in service to children and their families, was so …
[ continue ]